Nothing on this page implies camera reliability or fitness for your particular use. If you want to go all legal on me, please refer to the warranty.

Flood after a Fire

Back in 2014, a customer, who we'll call Herb, asked how rugged our cameras were. He then said his testing might damage the camera and asked about repairs. We explained that we've repaired a few cameras with impact or water damage, but they were all repairable. After some discussion Herb finally described the test: He'd start a really hot, noxious fire, let it burn for a while and then see how well his automatic fire suppression system did at putting out the fire. Herb was concerned he would have to ship the camera back for repair after every test. We suggested that he should enclose the camera and lens in a sealed box with a heavy heat-resistant window. As long as the box was adequately sealed to keep out the fuel, flames and suppression chemicals, the camera should be fine. Herb bought three cameras, used them heavily and never had to send them in for repair. Cleaning the sooty film off of the window was a different story ... 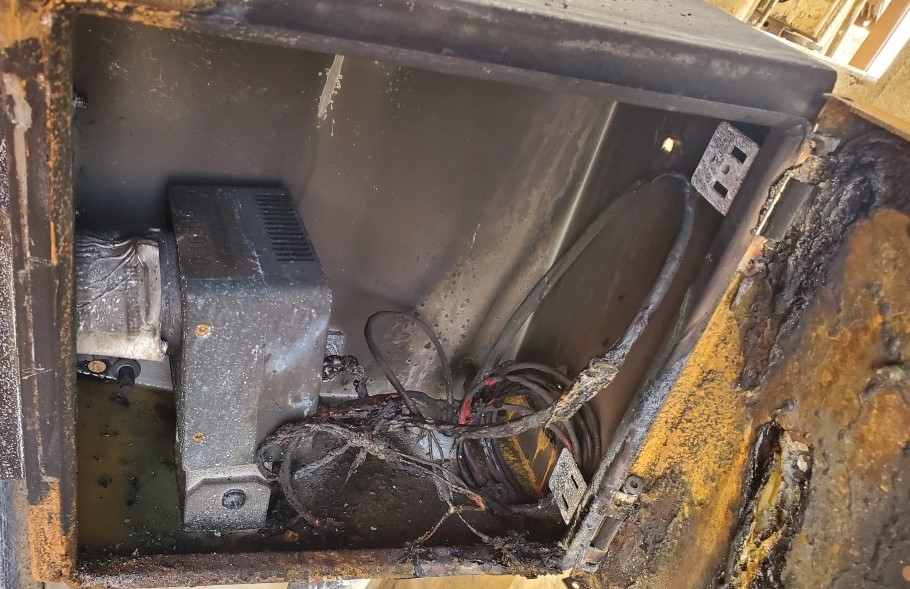 Fast forward to 2021, when a customer (not Herb) said that a camera was in a fire and asked if it was repairable. When asked how bad the fire was, they sent the photo above. Notice the melted wires, extensive corrosion, scorched camera, and the standing water in the bottom of the box. Fortunately, the camera was mounted about an inch above the bottom and stayed relatively dry. We always like a challenge, and said If it wasn't repairable, this would be a first for us. A week later the camera shows up with "Roasted" written on a post-it-note taped on top.

Since there were no signs of water damage, we connected the camera to ethernet and power. It started up and we were able to take videos with it. On further inspection, the only problems we found were a melted cooling fan and the USB ports didn't work due to the heavy soot on the contacts. Even though the fan pulled in the flames and melted, the design of our enclosure and cooling kept the camera internals clean, with no signs of soot on the PCBs, sensor, window or other critical components. Except for the fan, the customer, who doesn't use USB, could have attached a new lens and continued to use the camera!

Too bad the customer threw away the lens, wiring, and housing. It would have been nice to see the rest of the damage.

Weather forecast is dry but hot

Guess what ... they did it again! This time the camera was in a Sexton B200 enclosure and the fire was sufficiently intense to melt the aluminum cover, but not before the powder coating on the inside melted and dripped onto the camera. We got the camera back and no surprise, it works! The aperture and focus rings on the lens won't move, but we were able to clean the lens enough to take a video with it as is. 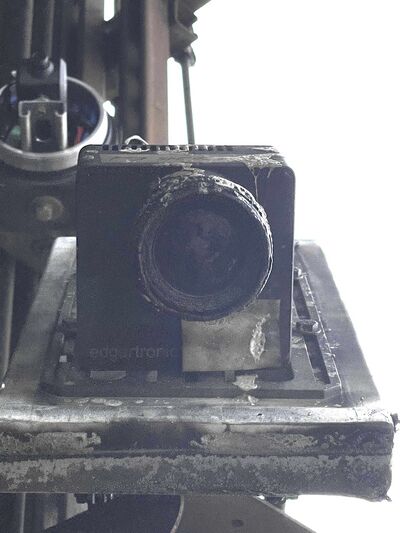 We are collecting photos and fun stories of the nasty treatment real customers inflict on our beloved edgertronic cameras. If you have something to add to the collection, please send it our way and we will add it to this page.

Retrieved from "https://edgertronic.mywikis.wiki/w/index.php?title=Edgertronic_reliability_-_Don%27t_try_this_at_home&oldid=5391"
Cookies help us deliver our services. By using our services, you agree to our use of cookies.