Note: Genlock terminology changed in software release v2.5.2. The change was done in a way that is backwards compatible for controlling applications that use CAMAPI.

All cameras must have identical settings except for Genlock Mode, Sensitivity and Shutter. The Shutter value must not limit frame rate. You are responsible for configuring each camera; there is no configuration information flowing over the genlock cable. Incorrect camera configuration will lead to unusable videos.

Should you wish to violate the above and have different settings, you must always guarantee the following: 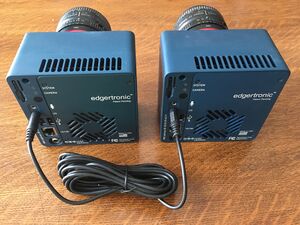 You can also use an accessory product, the Genlock Adapter for longer cabling runs and/or supporting more than 2 genlocked cameras.

Browse to the camera you chose to generate the genlock source; from the above instructions it will be at http://10.11.12.13. Configure the camera settings with genlock being configured as source. Then browse to each receiver camera and configure each one with identical settings, except of course set genlock to receiver. Once configured and properly cabled, look at the LEDs on all cameras to verify all cameras are in the run state (solid green camera LED). A blinking red camera LED indicates that the receiver camera isn't receiving a genlock signal.

Once the cameras are wired, configured, and triggerable, go ahead and trigger the source camera to verify the receiver cameras are responding to the trigger. During capture, look at the camera LED on each camera and verify none of them are blinking white. A blinking red/white camera LED indicates that camera was not able to maintain genlock. Check each captured video to verify the results are what you expected.

Browse to each receiver camera and adjust the settings. There are setting limitations:

Once all the camera settings are adjusted, do another trial video capture to verify the timing is compatible. The metadata file will indicate if each receiver camera was able to maintain genlock.

Additional technical details, if you are trying different settings on different cameras:

There are two genlock related settings in each captured video metadata file.

There are several metadata file keys whose meaning can be effected when genlock is enabled:

The genlock setting is stored on the camera so the value is used the next time you power on the camera. The value is also available in the metadata file. The possible Genlock values are described below:

If the receiver camera doesn't detect any genlock signal, the camera LED will blink red.

The original design concept for genlock was the same for the camera itself - capturing critical videos to get insight into the physical world. The video capture process was anticipated to be through the web user interface and a simple trigger button, which is all that is needed to manually capture a handful of videos. Once the edgertronic camera was integrated into more complex workflows, the use model changed, and additional aspects of the camera's overall operation need to be taken into account.

Although the cameras are in lock-step synchronization for triggering and capturing each frame, there are other aspects of the cameras that are operating asynchronously.

If your wiring requirements are longer than 10 meters (30 feet), you will need to use a Genlock Adapter with each camera.

The metadata file on the source camera will contain an entry indicating the delay from the incoming trigger and the start of the first frame following the trigger. The trigger delay value in the metadata file created by the receiver cameras is meaningless.

The camera can be triggered from three sources:

The UI / CAMAPI trigger() API, Multi-function button, and Tip of phone jack are logically or-ed together and only the source camera responds to the trigger event.

You can use the cable listed below to genlock two cameras (which does not support external trigger via wired remote).


If you are having problems with your cabling, test out genlock using the supplied 12' 2.5mm male-male genlock camera between the source camera and one receiver camera. Setup the two cameras in the UI, and then trigger the source from the UI. Both cameras should be synced and trigger at the same instant. If you are having problems when using your custom cabling, please check your wiring.

Electrically, the tip and ring are identical circuits, with the exception that the tip is always an input, while the ring is an output on the genlock source camera and an input on all genlock receiver cameras. Each signal has a 4.7K pullup to 3.3V, followed by a 165 Ohm series resistor. The other end of the 165 Ohm resistor connects to an ESD diode clamping array (GND and 3.3V), an FPGA 3.3V LVCMOS GPIO and an SOC LVCMOS 3.3V IO.

Retrieved from "https://edgertronic.mywikis.wiki/w/index.php?title=Edgertronic_multi-camera_synchronization_genlock&oldid=5103"
Category:
Cookies help us deliver our services. By using our services, you agree to our use of cookies.