This feature is supported in Software Version 2.4 and later.

You select the Save Mode in the Settings modal, as shown in Figure 1. 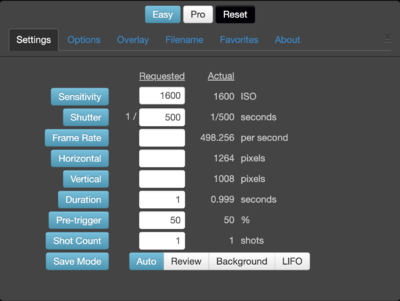 Auto is the default camera Save Mode setting. Out of the box, a new edgertronic camera is pre-configured to allow you to trigger the camera and then the camera encodes the captured frames into a video file and saves the file to the SD card. This is a simple use model to understand and works well when learning to take high speed videos.

The simplest camera operation is continuously filling the pretrigger buffer with video frames while waiting for a trigger event. Once triggered, the camera fills the post trigger buffer and automatically saves the captured frames to a file. When Shot Count (When multi-shot is enabled), the camera repeats the pretrigger fill, trigger, post trigger fill process until all buffers are filled, then automatically saves each captured video one by one. In either case, once the camera is configured, the user control is simply to create a trigger event. With multi-shot, an additional user control is to request the captured buffers be saved without having to fill all the multi-shot buffers. This mode of operation is called auto-save. With a Shot Count greater than one, additional user controls are available as described below.

Frame rate, duration, and resolution settings effect how many videos you would can take in one burst before saving the captured video frames. A 16GB DDR memory camera can hold twice as many unsaved frames as an 8 GB DDR memory camera. The camera defaults to Shot Count set to one. To find out how many videos can be captured before the camera fill all available frame buffer memory, clear the Shot Count field in the Settings tab and press the tab key. The actual column will be updated to display the maximum number of videos that can be captured using the current settings before the camera DDR memory is full.

Trigger the camera as normal. As long as there is another video capture buffer available, you can immediately trigger the camera again after the camera has filled the post-trigger buffer. Once all available buffers have been filled (as set via Shot Count), the camera will automatically starting saving all the captured video frames. This may take a few minutes so sit back and relax.

If you have triggered the camera and decide you do now want to keep the video, you can cancel the trigger so the capture buffer currently being filled will be available to hold frames from another trigger. Cancel the trigger while the post-trigger buffer is being filled by pressing the red X in the button box in the Web UI.

If one or more trigger events occurs and you do not want to save the captured video data, invoke press the wrench in the button box to bring up a dialog and confirm you want to discard all unsaved videos.

When all capture buffers have been filled, the camera will automatically start saving the captured video frames in each buffer. The video from each capture buffer is saved to a different file, as well as the metadata file associated with the video being saved. When saving a captured video, each filename will also contain the trigger number, such as for the third trigger, the filename might be slomo_1413060071_3.mov. If you have triggered one or more video captures and want to save them without having to fill all the rest of the capture buffers, you can press the blue save icon in the button box.

Trimming save in progress

While the camera is saving a captured video, it is possible to stop saving the remaining unsaved portion of the video currently being saved by pressing the orange trim icon in the button box. If there is another captured video that hasn't been saved yet, then after the camera finishes trimming the current video, it will automatically start saving the next unsaved video. You can again trim the next video being saved. If you want to also trim the front of the captured video before saving, then set the Save Mode to Review before save.

Trimming save in progress and discarding all unsaved captured videos

In a similar fashion, you can trim the save in progress and discard the captured videos in the unsaved buffers by pressing the red X icon in the button box and confirming you want to discard the rest of the unsaved videos.

You can download the saved video files by browsing to the storage directory and clicking on the video or metadata file you want to view.

For SD card storage, browse to:

For USB storage, browse to:

Get the last saved video filename:

For default file naming, the video files will all have the same prefix but the end of the video will have a number ranging from 1 to X (the number of videos you took with the multishot function).

Another easy way to download videos to a Linux, Mac or Windows PC is to use WebDAV.

You can review a video before saving, allowing you to trim the uninteresting beginning and end of your captured video. There are also some settings you can change after the video has been captured, including ISO and the text that is overlaid on each video frame. You can even save the same video multiple times, selection different regions to save.

Another camera mode of operation is review. The user can capture one or more videos, then review each a video setting the starting and ending frame for selective saving a region of the video. Once the user is done reviewing and saving selected regions of the captured videos, the user can again run the camera to restart the pretrigger fill, trigger, post trigger fill process. In the review mode of operation, the camera allows videos to be reviewed after all multi-shot buffers are filled instead of automatically saving all captured frames for all captured videos. In a similar way, with multi-shot enabled, an additional user control is to allow the captured buffers be reviewed without having to fill all the multi-shot buffers.

Examples of when review then save mode can be useful include:

When the camera is set to review then save mode, you can review the captured video, saving just the portion of the video that is of interest.

CAMAPI support for review before save 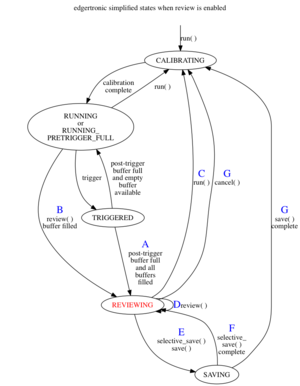 Review and selective save are supported by the camera by means of the REVIEW state in the camera's state machine, as shown to the right.

When invoking the run() CAMAPI method, include the requested_review key set to true in the requested settings dictionary. The camera will not autosave when review is enabled, instead the camera will go into the REVIEW state when all configured multishot buffers have been filled or when the review_frame() CAMPAI method is invoked.

When the camera is in the REVIEW state, the review_frame() CAMAPI method allows the camera to be configured to read out captured video frames at a specified rate, from the specified start frame to the specified end frame. The review() method also allow you to control if you want the camera to continuously loop, sending the selected region of frames over and over. If you want to lock step control the camera so you get exactly one frame per review() invocation, set the start and end frame to the same value and the frame rate to zero.

When you no longer need the captured video frames and want to capture new video, invoke the run() CAMAPI method.

Web UI support for review before save mode

The captured video review feature can be enabled or disabled using the camera's Web UI. When disabled, the camera automatically saves captured videos when the configured number of multishot buffers are filled. When review is enabled, the camera does not automatically save videos. Instead, after one or more videos have been captured to multishot buffers, a review bar is shown below the video window. The review bar has two markers, one for setting the starting frame and the other to set the last frame. As long as you have are dragging one of the markers, the frame associated with that marker position is displayed.

You can also select which captured video to review by setting the multishot buffer value.

When you are done reviewing the videos, you can discard all captured video frames and capture more videos by clicking on the run icon.

When the camera is in the CAMAPI_STATE_REVIEWING state, the CAMAPI configure_save() method can be invoked to change the following settings:

High-speed video cameras typically capture videos at a faster rate than they can be processed. The edgertronic family of high-speed cameras include an internal memory (8 or 16GB), used to hold the captured videos until they can be encoded and saved to the storage device.

If you are capturing regular events, such as a baseball pitches, you can focus on capturing the events of interest, with the camera encoding and saving the videos in the background. If your camera has sufficient internal memory, and as long as you don't over-run that memory, you will always be able to trigger.

CAMAPI support for save mode

Auto save mode, review before save mode, and background save mode are supported by camera configuration settings, the camera state machine, and camera status information that can be retrieved.

The active save mode is set when invoking the run() CAMAPI method, by including in the requested settings dictionary the requested_save_mode key set to 0 for auto, 1 for review, and 2 for background save mode.

There are several dictionary keys in the camstatus dictionary returned by calls to the get_camstatus() CAMAPI method:

Retrieved from "https://edgertronic.mywikis.wiki/w/index.php?title=Save_mode&oldid=4680"
Category:
Cookies help us deliver our services. By using our services, you agree to our use of cookies.